Over 150 people, including a number of local councillors, attended a public meeting on earthquakes and unconventional drilling in the Weald Basin held last Saturday (18 May) evening at Beare Green Village Hall. The gathering was organised by Brockham Oil Watch and chaired by Max Rosenberg, Chairman of CPRE Mole Valley.

David K Smythe, Emeritus Professor of Geophysics in the University of Glasgow, delivered the main talk, covering the history of oil & gas exploration in the Weald between 1960-90 versus the current phase led by penny-share companies of questionable competence and integrity, the reasons why he supports the Edinburgh University thesis that the Newdigate earthquakes are induced by activity at the Horse Hill site, and recommendations for local residents as well as their elected representatives.

Professor Smythe criticised the authorities and the operator for withholding crucial work programme logs from the Horse Hill site, and advised that the precautionary principle should apply halting operations while more research is undertaken. He called for residents to collate systematic data on earthquake damage. 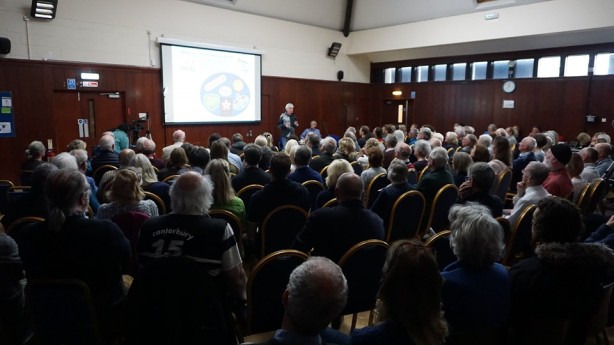 Ada Zaffina of BOW gave a brief overview of the loophole in the UK regulatory system with regards to acid stimulation, potentially allowing these stimulation treatments to take place under the guise of acid wash. The presentations were followed by a lively Q&A time stretching the duration of the meeting to two hours.

We are very pleased with the turnout, especially since we were competing with the Eurovision Final and the FA Cup Final. The level and detail of questions and comments from very astute locals and councillors shows deep concern about the earthquakes and the possibility of larger magnitude tremors. We hope that this will embolden more people to speak up about their concerns and demand clear action.

With the recently released FOI documents showing that a well intervention on HH-1 was planned for early April 2018, UKOG’s fundamental argument that the earthquakes started before they did any work on this well is put into question. There are striking coincidences between the timings of operations (at Horse Hill) over the last year or so and ongoing tremors, and those are much stronger than the 0.5ML that halts operations on fracking sites up North. Many people in Newdigate live in constant anxiety over the prospect of another, possibly stronger earthquake. We shouldn’t be searching for a smoking gun that Horse Hill is inducing the tremors, we should be asking that operations be stopped until we are absolutely sure that they are not causing them.

We would also like to thank everyone involved in the organisation and promotion. This event is a great example of worried communities coming together. 6 thoughts on “Public meeting on earthquakes fills up village hall”